Craig and I have been dating for about a year and a half. Since we started our journey together it's been nothing but progress for the two of us. We started designing jewelry together, sourcing beads together and collecting crystal specimens together. I was immersed in my company All Around Style but ready to begin a deeper journey into jewelry design because of the insights gained from working with Chicago Responsible Jewelry Conference. Craig's insta page @TheJewelHuntr, helped us discover hands on mining opportunities in the United States. Soon he was obsessed with watching folks pull massive 'Herkimer Diamonds' from pockets found in up state NY. Then we decided we needed to do this ourselves.

Craig and I embarked on an adventure to enrich our knowledge of gemstones and where they come from in June of this year. This was the first of many. We have plans to go back before the end of the 2019 season. (Fingers crossed, We are working toward this goal right now. )

For the initial trip we planned to go in May as a birthday gift for Craig but some times plans don't work out. I took it as a sign and was able to reschedule the Air BnB for June. The plan was to drive to Middleville, NY, stay for a week, and mine as much as we could while there. 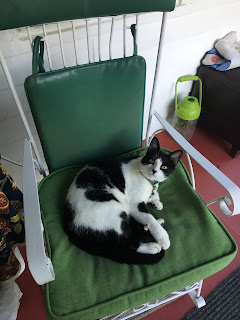 We were greeted by fresh air and a beautiful summer garden when we pulled up to our host's home. Next we noticed a note on the door. As soon as we walked up to the door, our host and her grand daughter were walking up the street followed by their cat. (The friendly fellow photographed above.) The home was over 100 years old and had so much character to it. I knew we were in for an entirely different experience of living. There were no city sounds. How peaceful. 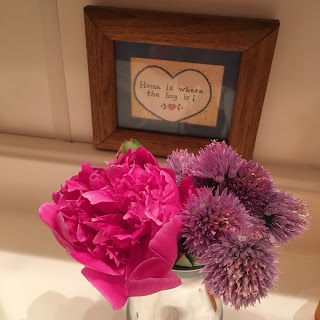 The grand daughter picked fresh flowers for us and decorated the house with small bouquets. We were welcomed with open arms. It's very refreshing to be so far away from Michigan. 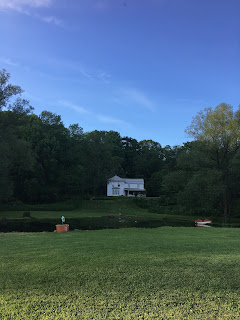 Across the road from our home was a pond with a paddle boat. Beyond the pond is the West Canada Creek. The creek is beautiful and full of fresh water and slate rock. Our stay in NY was cozy. We had a hard time sleeping because the anticipation of mining every morning kept us excited. 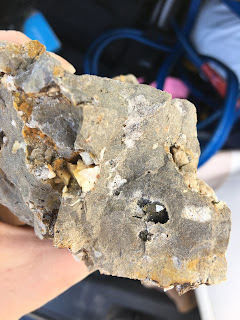 Our experience was amazing. If you take a look at the stone above you can get a feel for the minerals we were working with. The gemstones we were looking for are known most commonly as "Herkimer Diamonds" but they are Quartz. To be specific they are a type of quartz that is double terminated and extremely clear. They also have Anthraxolite inclusions, which appear as black within the quartz. You can see druzy on this stone, dolomite, quartz crystal, and iron set in an incredibly hard lime stone. 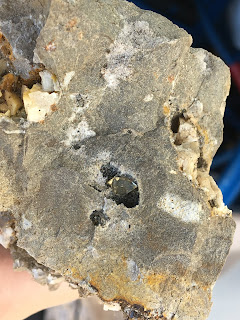 If you take a closer look at this stone you can see the little Double Terminated crystal within what we call a pocket. The stone with the crystal in it is called a Matrix. The black mineral in the pocket is Anthraxolite. What we learned while mining is where there's Anthraxolite, there will be Double Terminated Quartz. Another thing you look for while mining for these babies is looking for tiny holes in the limestone which indicate larger pockets. 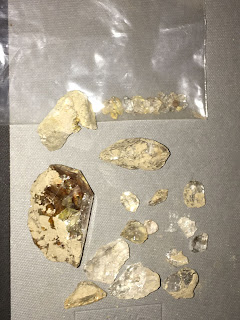 You can see we found quite a few pieces just laying around in the dirt. What we discovered is a lot of these "Herkimer Diamonds" just fall out of stones as the owners are doing their commercial work. I was challenged in my expectations as far as what I considered to be a desirable gemstone. My idea of the gemstones I wanted was perfection. When I understood more about how these crystals form, I realized they take on the shape of the pocket they form in. These crystals also form like a thread of bubbles together and easily break apart while humans extract them from their host stone. 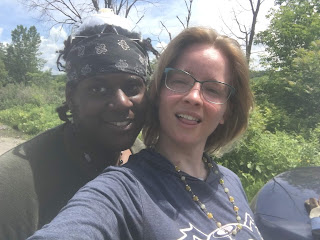 Mining for Double Terminated Quartz in up state NY is no joke. There is a lot of hard work that goes into discovering the magic within them. We spent many hours doing back breaking work with no reward. When it comes to mining for Double Terminated Quartz, I recommend taking your time, working smart not hard, and spending at least a day understanding the minerals/environment you are working with. It was by chance that Craig and I found our largest specimens on this trip. 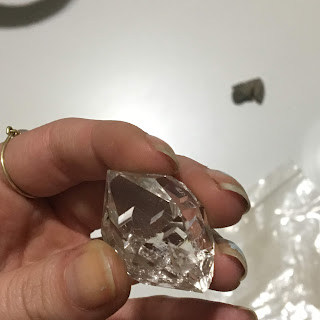 My favorite specimens are the matrix pieces we collected. Gemstones are incredibly hard to photograph and even video does not do the sparkle and detail justice. We would adore telling you more about our trip in person while you hold a few of our discoveries in your hand. Just drop a line! We are eager to learn more and share what we found on this adventure.

If you would like to take a look at our private selection for purchase contact us directly. We have some very exciting new businesses in the works. Stay tuned and go explore! 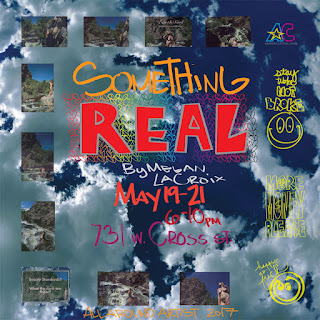 Why I Started Posing Nude